Mississippi Innocence screened last weekend at The Crossroads Film Festival in Jackson, Mississippi.  On Friday night Levon Brooks was present to receive the “Transformative Award”, an award envisioned by former Crossroads Festival board member, Deborah Wright, that is given to the film “that has the ability to transform opinions, lives, and ultimately, history.” 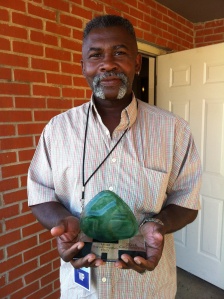