“Mississippi Innocence” to screen at the Newseum in D.C. on October 3, 2011 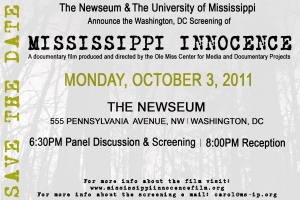 The screening will take place at The Newseum’s Annenberg Theater. Prior to the screening there will be a panel discussion moderated by Dahlia Lithwick of Slate Magazine — and including Judge Harry Edwards, American University’s Washington College of Law Professor Angela Davis, Producers: Joe York and Tucker Carrington, and others.  The University of Mississippi is hosting a reception in The Newseum foyer after.  This is a free event, however there are limited tickets.  Please email carol@ms-ip.org if  you are interested in attending.